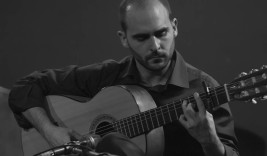 Pablo took up the guitar at age 8. He did elementary and intermediate guitar studies at in Angel Arias and Arturo Soria Conservatories in Madrid culminating in the Award of Honor.

He then completed his "Superior" studies under the tutelage of Demetrio Ballesteros in the Royal Superior Conservatory of Music of Madrid (Real Conservatorio Superior de Madrid)..

Along the way Pablo completed a degree in journalism at the Universidad Complutense de Madrid.

Pablo San Nicasio was the first performer to offer a flamenco guitar recital in the Superior Royal Conservatory of Music in Madrid and in the Prado Museum with the production, "Sevilla, al Compas de Murillo."

As a journalist, Pablo coordinates the "Al Toque" section of the Acordes de Flamenco magazine. He is a reviewer special segments of www.jondoweb.com ("Flamenco Hoy" award in 2010 for best furthering the visibility of flamenco), www.flamencobrasil.com and www.deflamenco.com. He is a special contributor to Doce Noches, Sexto Orden, Guitarrista, La Flamenca and El Canon magazines. Pablo also has participated in the collectible publication, "30 Años de Democracia" (30 Years of Democracy) for El Mundo newspaper as well as the culture section of the Cajamar Foundation.

Pablo also takes part in "El Callejon del Cante" for RNE (the national broadcaster radio of Spain) and he is the creator of www.chalaura.com, website dedicated to flamenco and copla which was named Best Media Outlet for Flamenco 2015 by specialized critics.

As an author, Pablo is responsible for "Contra Las Cuerdas" (Oscar Herrero Publications) which won the "Flamenco Hoy" award in 2014 for best book on flamenco.

He has served as Artistic Director for the first two editions of "Jornadas del la Guitarra Española del Molino del Manto" (2014, 2015) as well as organizing the talks for the conference "Flamenco de la Quinta del Sordo".

Pablo San Nicasio is currently a member of the National Awards for Spanish Flamenco Journalism and also for the Independent Music Awards: MIN.

Invited teacher in the Music Journalist  Master in the San Pablo CEU University. 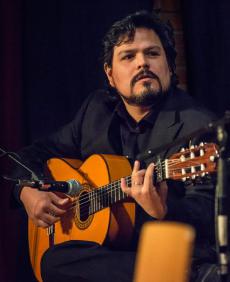 Born 1978 in Madrid, Alberto has been a professional guitarist since 1996, having studied beginning and intermediate levels in the Joaquin Turina in Madrid.

In 2000 Alberto finished a degree in Telecommuications.

Alberto has studied under flamenco masters Tomatito and Manolo Sanlucar. Apart from performing, Alberto is a composer primarily for film and theater. His vast teaching experience covers the genres that's he has worked in himself: classical guitar, Argentine tango, rock, blues, jazz and the culmination of his guitar prowess, flamenco.

For Alberto, flamenco is the deepest source of inspiration  of inspiration the pure root of the guitar. He has worked on with Agapula and Passion Flamenca as well experimenting in Arabic flamenco with Luciano Galiani in principal venues throughout Spain.

As a sound engineer, Alberto has participated in the recording and editing of various groups' projects - all the while maintaining his main passion of being on the recording side of the glass, guitar in hand. 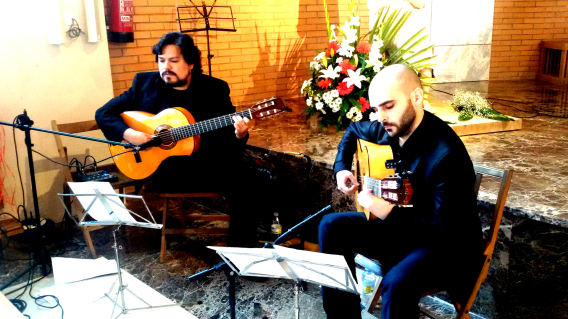 “Dúo Sonanta” for guitar concerts, recitals at the highest level and all kinds of events. They can work in Madrid and play throughout Spain and all over the world. 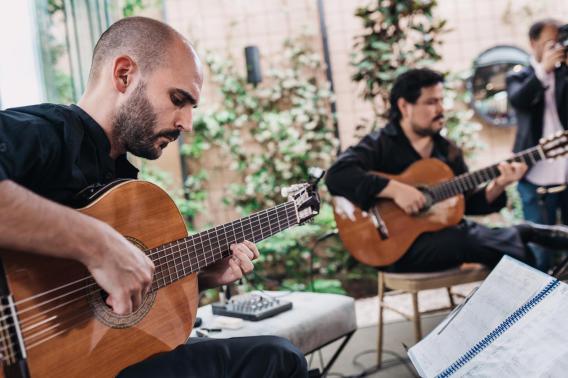 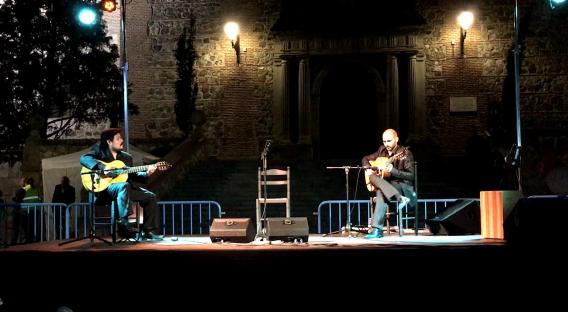 Alberto Espejo and Pablo San Nicasio are specialized in luxury events, high level guitar concerts with the largest repertory based in all styles: flamenco, classical, jazz, soundtracks, blues, rock, pop, etc. They can work with other musicians and flamenc 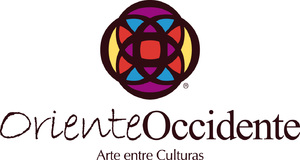 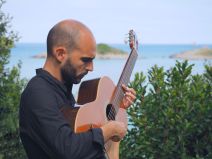 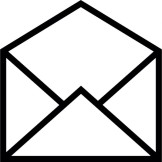